Editor's note: Each December, the journal Science identifies one scientific discovery as its "Breakthrough of the Year." For 2021, this recognition went to AlphaFold and RoseTTA-fold—artificial intelligence software that accurately predicts the 3D structure of proteins. Guest writer and microbiology graduate student Colleen Mulvihill reports on one example of how UT Austin scientists are using the new technology to solve longstanding questions in human health. 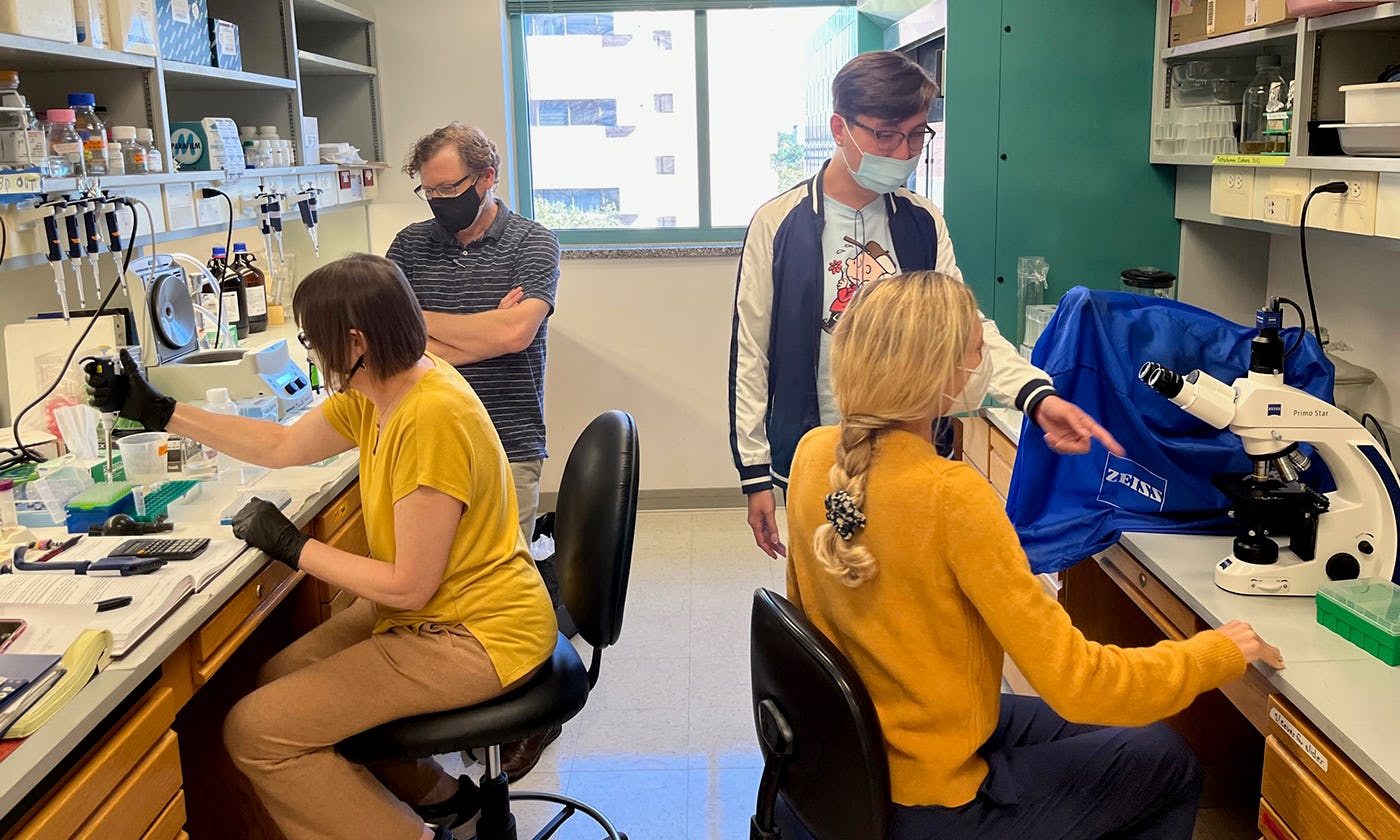 A tiny organism that eats fallen plant matter in ponds and streams might be a key for helping scientists at The University of Texas at Austin answer longstanding questions about human birth defects. Called tetrahymena, these single-celled aquatic organisms look nothing like humans. Yet despite evolving independently for roughly a billion years, we both share an almost identical organelle that is crucial for life: cilia. Derived from the Latin word for eyelash, these structures look like tiny hairs protruding from cells.

Tetrahymena use their many cilia, beating together like a crew of oarsmen, to propel themselves through water. In humans, cilia are important for a wide variety of essential functions, including the partitioning of cells and organs during development. Errors in making one or more ciliary proteins are the most common cause of congenital birth defects. There is no cure for most of these ciliopathies, and they often result in death; birth defects are the leading cause of infant mortality in the United States.

While it has been known for decades how important cilia are, much is still unknown about ciliary proteins and how they work together to create ciliary function. Researchers in the labs of John Wallingford and Edward Marcotte at UT Austin have been working hard for the last year and a half to begin to understand the components and structures of the protein complexes in cilia.

In order to understand how the proteins function, the researchers first needed to collect enough ciliary proteins for their experiments. The group decided to use cilia from tetrahymena for their work due to the large amounts of cilia protruding from the cells.

"My daughter calls it a hairy avocado," Marcotte said.

Because cilia are highly conserved structures, the researchers are able to use tetrahymena as a good proxy for human cilia (isolating large amounts of human cilia would be very challenging). The team grew vast amounts of tetrahymena in the lab—roughly 60 liters (or 16 gallons) over the past year—which they needed to be able to isolate and study the ciliary proteins. Isolating the proteins also required a lot of work.

"I've always been a computational scientist, and this project has been a lot of wet lab work," said Caitie McCafferty, a graduate student who is leading the work. "Learning how to do all of that stuff has been a huge challenge."

Through a good amount of trial and error, McCafferty and Gabe Hoogerbrugge, a technician in the Marcotte lab, ironed out the protocol with the help of Ophelia Papoulas, an experienced biochemist in the lab, and Candice Nichols, a technician in David Taylor's lab.

Once they had the ciliary proteins isolated, the researchers took a multi-pronged approach to understand the identity of the proteins and how they assemble. They first imaged the proteins using a very powerful transmission electron microscope to understand what types of complexes were present and at what concentrations. Next, they identified proteins in the complexes by weighing them via a technique called mass spectrometry. Finally, they essentially "stapled" the different proteins together by chemically linking those that were close and, therefore, most likely interacting.

While all of these methods provided a lot of information, "There's still a missing piece. It's not really enough data," said McCafferty.

The final necessary tool was developed only recently. A longstanding puzzle in molecular biology has been the prediction of protein structures (or three-dimensional shapes) given only the sequences of amino acids they're made of. Sequences determine how the proteins fold into the shapes they need to function. Historically, there have been many more protein sequences known than protein structures, leaving a big gap in understanding how the machinery of our cells works. Google's DeepMind group recently released an extremely accurate protein structure prediction tool called AlphaFold.

This open-source software has helped the UT Austin researchers understand how all of the experimental data fits together and will eventually help them map the protein complexes with a high level of detail.

"This was a big breakthrough," said Marcotte. "It's just been completely blowing up projects for us that we have been making slow, steady progress on. But now, leaps forward."

While the project is still in process, there have already been some surprising findings. The group found that, again and again, an unknown protein complex showed up in the samples.

The team scoured the literature for anything similar to it and found only one reference to the complex in a Ph.D. dissertation from years ago, describing a distantly related organism. The UT Austin researchers predict the structure is in many other species, although it's unclear if it's in humans.

"A lot of these don't have cilia," said McCafferty. "So it's interesting that it's in the cilia here."

It's been a long process from first trying to isolate cilia to where the team is now, but the researchers have found the experience very rewarding.

"The most exciting thing has been ... to actually see the beautiful [protein] structures so, like, right there, is all your hard work," said Hoogerbrugge. "It's very gratifying."

Beyond the potential for better understanding the causes of relatively common and lethal birth defects, the researchers are driven by the joy of scientific discovery.

"I love working at the fringes of knowledge in biology," Marcotte said. "It's really beautiful to be able to go in and look into nature and see how it works. That gives me a huge amount of pleasure, so every time we do an experiment like these and we see a new thing, that's just so exciting."