As Cryo-EM Capabilities Expand, Cool Science at UT Gets a Boost 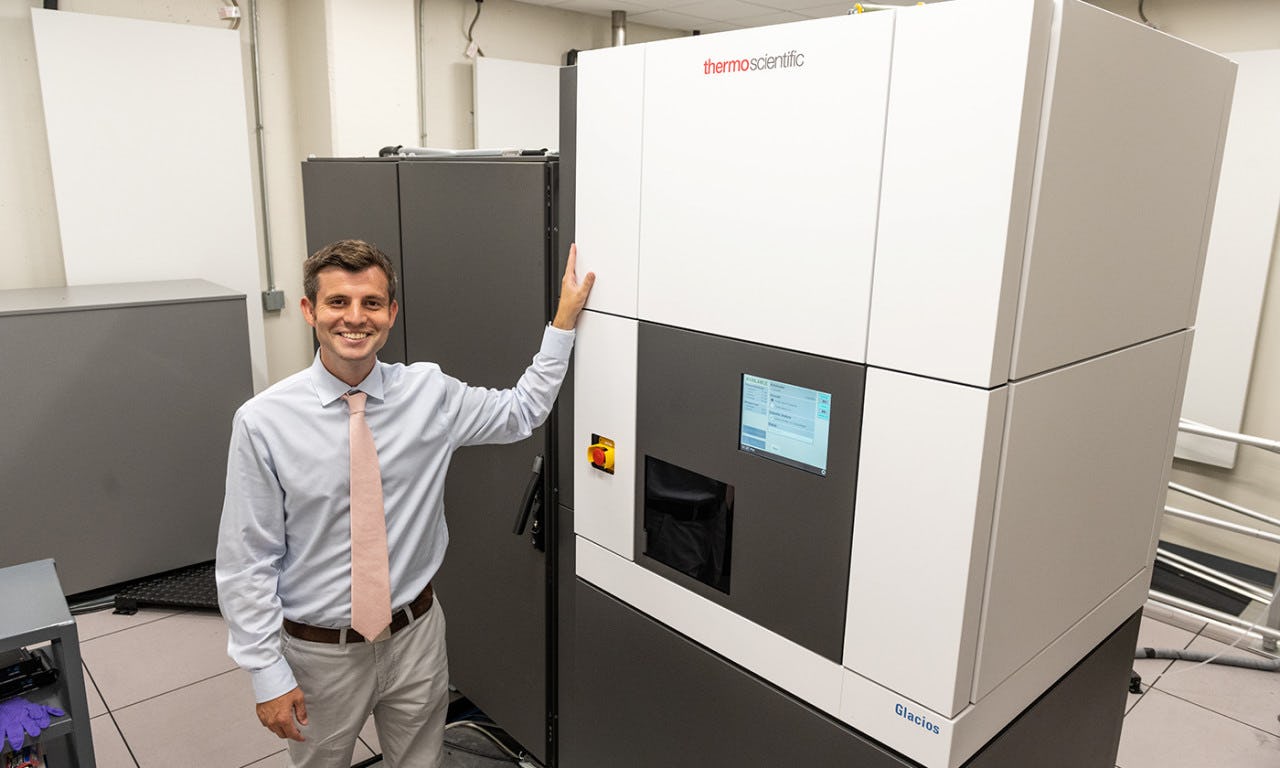 Imagine biological and chemical imaging tools so advanced that they are able to show the molecular details of a virus as it attaches to and enters cells, or the alignment of vanishingly tiny crystals at an atomic level so as to lend insights for new solar energy technology.

New and upcoming additions to UT Austin's Sauer Structural Biology Laboratory are paving the way for just such advances. Recent support from Tito's Handmade Vodka, the U.S. Army and Judy and Henry Sauer will expand the capabilities of the campus cryo-electron microscopy facility and allow it to embark on new areas of research across UT.

"This opens up a whole new avenue for other scientists and engineers at the university who want to know the structures of small molecules," said David Taylor, assistant professor of molecular biosciences and co-director of the Sauer Lab.

Cryo-EM, as it's known in short-hand, led to a 2017 Nobel Prize in Chemistry for its inventors. The imaging method helps researchers "freeze biomolecules mid-movement and visualize processes they have never previously seen," the Nobel committee noted.

When UT Austin opened its own cryo-EM facility that same year, researchers in the newly created Sauer Lab started exploring the chemistry of life as never before, using samples cooled to cryogenic temperatures. By 2020, the lab had earned worldwide attention as the location where Jason McLellan, associate professor of molecular biosciences and Robert A. Welch Chair in Chemistry, and his team were the first to map the structure of the infamous spike protein from the SARS-CoV-2 coronavirus. They designed the protein for use in many COVID-19 vaccines, including all of the ones being administered in the U.S.

This summer, Tito's Handmade Vodka made a lead gift to advance McLellan's research, specifically the development of vaccines and antibody therapies for COVID-19 variants and other emerging pathogen threats, using an essential technology upgrade. The upgrade allows for what's known as cryogenic electron tomography imaging capabilities (cryo-ET), an advance that allows for capturing details about key processes, such as a virus's methods for attaching to and entering cells.

Tito's Handmade Vodka's lead gift will be used to match additional gifts from other donors and funders to support the lab's life-saving vaccine research.

Meanwhile, in May, a grant from the U.S. Army allowed the Sauer Lab to welcome a new electron microscope that will speed up the process of mapping structures of proteins and molecules and expand its capabilities into new areas of research.

"We are thrilled to see public and private funders stepping up to keep our researchers in the Sauer Structural Biology Lab at the leading edge of technology," said David Vanden Bout, interim dean of the College of Natural Sciences. "They are showing the world the power of funding for basic science, and setting the pace for others to join us in accelerating world-changing research."

The Glacios cryo electron microscope, produced by Thermo Fisher Scientific, began operations in recent months. Taylor, who is principal investigator on the grant that enabled the new microscope, uses cryo-EM technology to focus on CRISPR, a natural defense mechanism in bacteria that is being adapted for use in gene editing and has potential for future cancer and infectious disease advances. With research support from the Army, he is also investigating ways to build materials using rational protein engineering and computational prediction of protein interactions.

"The cryo electron microscope provides an exciting new capability to analyze in a high-throughput manner, the larger biomolecular architectures that are being formed using professor Taylor's assembly techniques," said Stephanie McElhinny, a program manager at the U.S. Army Combat Capabilities Development Command's Army Research Lab. "His research may ultimately provide design rules for the assembly of large-scale biological materials with advantageous properties such as the ability to harvest energy or to sense a chemical or biological threat and respond by neutralizing or encapsulating it."

Although so far molecular biologists have been the primary users of the lab, the new equipment will expand opportunities for chemists and materials scientists to make use of the lab, too.

The new microscope will enable scientists to use a relatively new technique in structural biology called microcrystal electron diffraction (MicroED). Preparing samples for MicroED is much easier than for conventional cryo-EM or the other widely used approach in structural biology, called X-ray crystallography. In all three techniques, researchers have to prepare crystals of the molecules or proteins they want to find structures for. But with MicroED, the crystals can be a thousand to a million times smaller than those needed for the other techniques.

"We have so many compounds in our lab that don't crystalize, so we don't know what the structure is," said Michael Rose, associate professor of chemistry who plans to use the new microscope as part of his work on improving the efficiency of solar cells. "If we can make this technique work, this would change our entire way of operating."

In that project, they're growing ultrathin layers of an organic material on top of a traditional solar cell that allows more of the sunlight to be converted into electricity. He said the new microscope and MicroED technique should enable them to see exactly how the molecules in the coating are oriented and where each atom within the molecules is located.

Gabriella Ruiz is a graduate student in Rose's lab who is learning how to use MicroED and spearheading its application to the solar cell project, and she hopes, many other projects to come.

"After grad school, what I want to be is a facility manager, someone who is in charge of one of these instruments and knows how to operate it and can help people on multiple different projects," she said. "The fact that I have a project that's actively training me for that future job has been really exciting."

The solar cell project is co-led by Rose and Sean Roberts, another UT Austin chemist, with funding from the Keck Foundation.

The Sauer Lab launched four years ago with a mix of public and private funding, established in part through a bequest gift from one sister-in-law to another; its complete name is the "Elizabeth Anne Sauer, BBA 1966, Structural Biology Laboratory in honor of Judy Camp Sauer, BA Biology, 1964." This year, the lab received a major gift from Judy and Henry Sauer to support the David Taylor, Ph.D., Fund in Structural Biology. 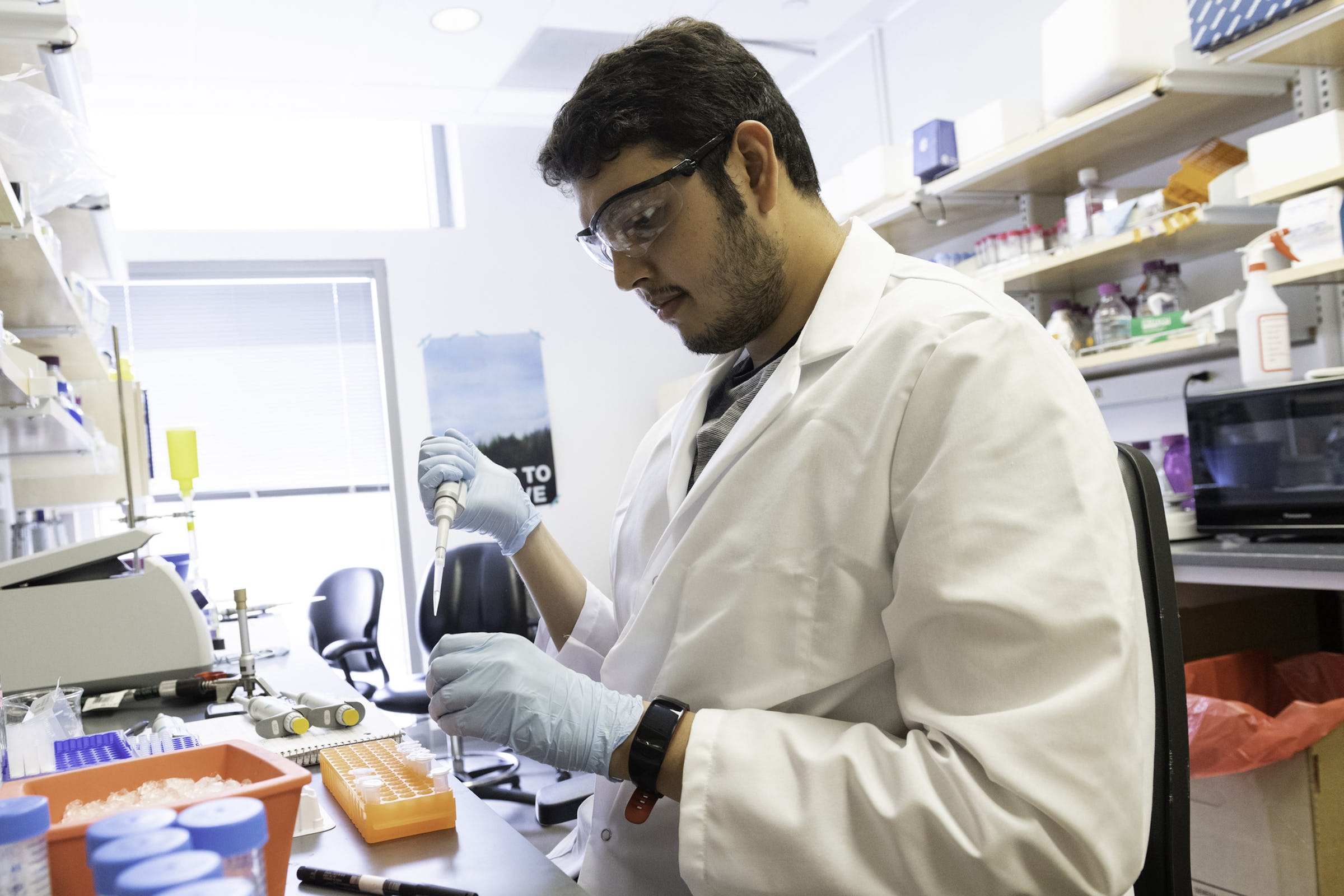