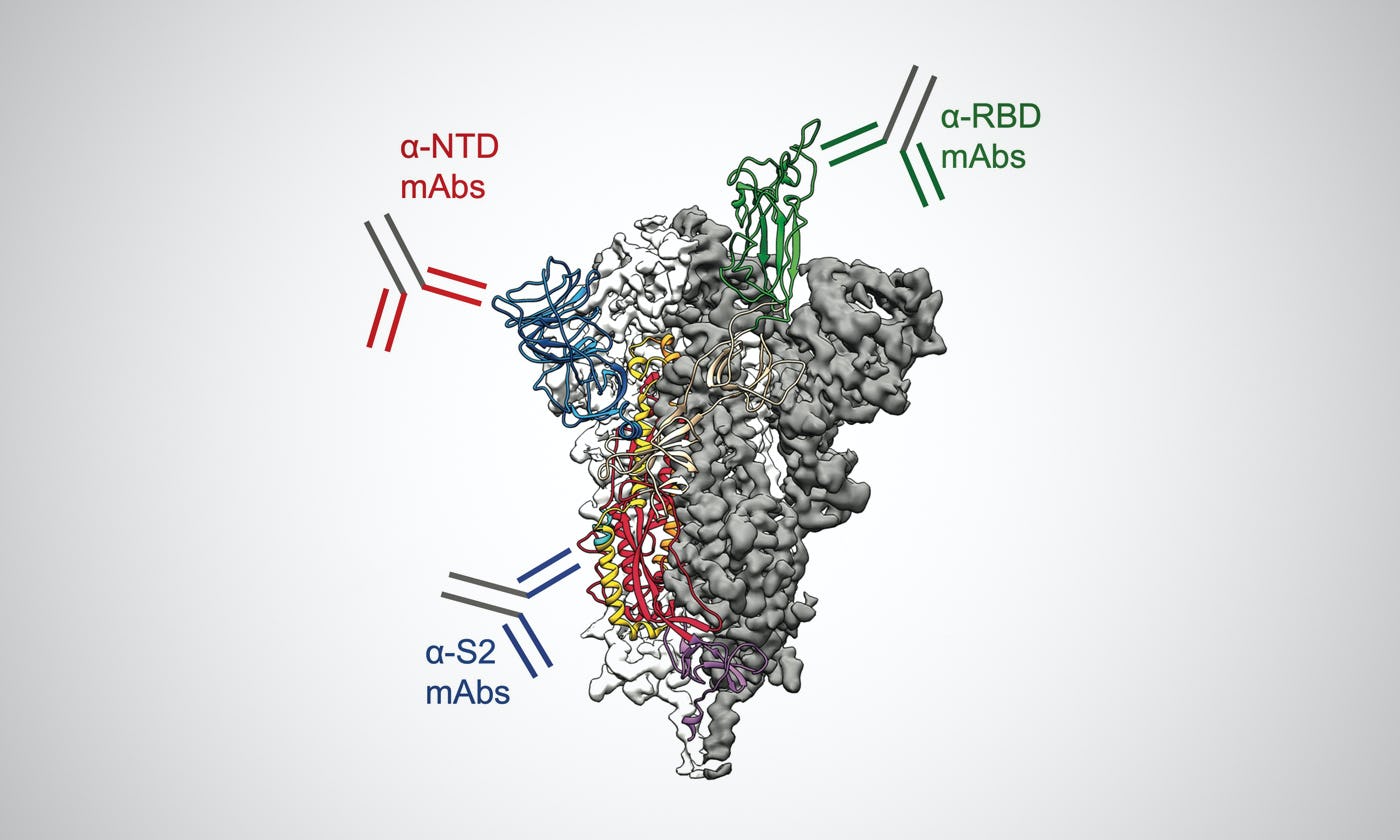 An analysis of blood plasma samples from people who recovered from SARS-CoV-2 infections shows that most of the antibodies circulating in the blood -- on average, about 84% -- target areas of the viral spike protein outside the receptor binding domain (RBD, green), including the N-terminal Domain (NTD, blue) and the S2 subunit (red, yellow). Illustration credit: University of Texas at Austin.

The most complete picture yet is coming into focus of how antibodies produced in people who effectively fight off SARS-CoV-2 work to neutralize the part of the virus responsible for causing infection. In the journal Science, researchers at The University of Texas at Austin describe the finding, which represents good news for designing the next generation of vaccines to protect against variants of the virus or future emerging coronaviruses.

Previous research focused on one group of antibodies that target the most obvious part of the coronavirus's spike protein, called the receptor-binding domain (RBD). Because the RBD is the part of the spike that attaches directly to human cells and enables the virus to infect them, it was rightly assumed to be a primary target of the immune system. But, testing blood plasma samples from four people who recovered from SARS-CoV-2 infections, the researchers found that most of the antibodies circulating in the blood — on average, about 84% — target areas of the viral spike protein outside the RBD — and, apparently, for good reason.

"We found these antibodies are painting the entire spike, both the arc and the stalk of the spike protein, which looks a bit like an umbrella," said co-corresponding author Greg Ippolito, who is a research associate professor in UT Austin's Department of Molecular Biosciences and an assistant professor of oncology at UT Austin's Dell Medical School. "The immune system sees the entire spike and tries to neutralize it."

Many of these non-RBD-directed antibodies the team identified act as a potent weapon against the virus by targeting a region in a part of the spike protein located in what would be the umbrella's canopy called the N-terminal domain (NTD). These antibodies neutralize the virus in cell cultures and were shown to prevent a lethal mouse-adapted version of the virus from infecting mice.

The NTD is also a part of the viral spike protein that mutates frequently, especially in several variants of concern. This suggests that one reason these variants are so effective at evading our immune systems is that they can mutate around one of the most common and potent types of antibody in our arsenals.

"There's an evolutionary arms race going on between the virus and our immune systems," said Jason Lavinder, research associate in the McKetta Department of Chemical Engineering and co-corresponding author of the new study. "We're all developing a standard immune response to this virus that includes targeting this one spot and that's exerting selective pressure on the virus. But then the virus is also exerting its evolutionary strength by trying to change around our selective immune pressures."

Despite these maneuvers by SARS-CoV-2, the researchers said about 40% of the circulating antibodies target the stalk of the spike protein, called the S2 subunit, which is also a part that the virus does not seem able to change easily.

"That's reassuring," Ippolito said. "That's an advantage our immune system has. It also means our current vaccines are eliciting antibodies targeting that S2 subunit, which are likely providing another layer of protection against the virus."

That's also good news for designing vaccine boosters or next-generation vaccines against variants of concern, and even for developing a vaccine that can protect against future pandemics from other strains of the coronavirus.

"It means we have a strong rationale for developing next-generation SARS-CoV-2 vaccines or even a pan-coronavirus vaccine that targets every strain," Ippolito said.

UT Austin researchers are among several in the world now aiming to develop a single coronavirus vaccine to fight infection from all coronaviruses, not just SARS-CoV-2.

The first author of the study is William Voss, a graduate student at UT Austin. In addition to Lavinder and Ippolito, senior authors from UT Austin are Jimmy Gollihar, Ilya Finkelstein, Brent Iverson, Jason McLellan and George Georgiou. Georgiou is a professor in the McKetta Department of Chemical Engineering and at UT Austin's Dell Medical School. Gollihar is also affiliated with the Army Research Laboratory South.

Collaborating institutions are the University of North Carolina at Chapel Hill, the U.S. Army Medical Research Institute of Infectious Diseases and the Centers for Disease Control and Prevention.

This research was funded in part by the National Institutes of Health, the Clayton Foundation and the Welch Foundation.

Lavinder developed a new technology called Ig-Seq that for the first time allows characterization of the number and types of actual IgG antibodies in circulation, as opposed to what could be potentially produced.

Surprisingly, across all four individuals whose blood plasma was analyzed, the NTD-directed antibodies were extremely similar. This suggests that humans in general already have the genetic blueprints for this type of antibody.

"Multiple donors were finding a common solution to make an antibody against the NTD that could protect the donor," said Jason Lavinder. "And that's unusual. You're not normally sharing common antibodies across different people."

This insight might help explain why certain variants of concern are better able to evade our defenses. If NTD-directed antibodies are one of our most potent weapons against SARS-CoV-2, it makes sense that the versions of the virus that survive to infect more people are those that somehow manage to find a way to evade that weapon.